U-352:was a German Submarine that was used during the notorious U-boat attacks during WWII   along the NC Coast. On May 9, 1942 it was sunk by the Coast Guard Cutter   'Icarus.' This is the wreck that most of the people first come to North Carolina to dive.   The wreck is small and intact and can be circumnavigated a couple of times   during a normal dive. It is sitting on its keel, with a strong (45 degree?) list   to the starboard side. Most of what you see on the bottom is the remains of the   pressure hull. The U-boat's outer casing has, for the most part, rusted away. The depth for this dive is 100-115 feet.

Vermillion:The Vermillion is a 460 foot liberty ship that was sunk in 1988 as part of the South Carolina artificial reef program; located 27.5 nautical miles from the south jetty at Winyah Bay. The Vermillion sits in 110 feet of water. This ship wreck is a haven for Grouper and other tropical fish species. Sand Tiger sharks are frequent guests of this site. This is a huge site that requires multiple dives to see the entire site. Divers can penetrate the wreck. This is a great site for Deep and Wreck Diving Specialties. 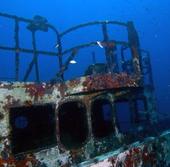 Spar: The Coast Guard Cutter Spar was sunk as a diver friendly wreck just yards from the Aeolus. Known as a popular spot for Sand Tiger Sharks, the 180ft long and 37 ft wide Spar  in 100ft of water. In 2011 the force of Hurricane Irene picked up the Spar, spun her around 180 degrees, and she now rests at an angle. This repositioning made the Spar an entirely new dive site with multiple locations for penetration

Schurz: The Schurz was originnally a 255-foot German gunship named the SMS Geier that was built in 1894. In 1914 the United States seized the ship and took control over the ship, renaming it the USS Schurz. When WWI broke out this ship was one of Germany's target ships for destruction because they didn't want their own ship to be a factor in their own defeat; however all destruction attempts failed. It wasn't until June 21, 1918 that the Schurz found its position in 110 fsw when it collided with the SS Florida. A heavy concentration of marine life can be found here and typically includes: large schools of baitfish, sand tiger sharks, grouper, and amberjack.