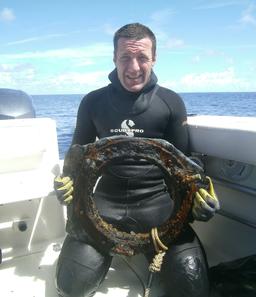 Rosin Wreck:The Rosin Wreck is a large wreck 40 mile south of Masonboro Inlet. It sits in 115 ft of water and rises to about 85 feet. The ship is pretty well defined. There is a giant swim through where the superstructure of the wreck has rusted away leaving only the ribs of the ship.Thousands of baitfish, grouper, and even sand tigers are all in the massive swim through.

Sherman Wreck: Originally a 200 ft. blockade-runner, this 120 year old post-Cival Ware wreck lies 52 feet of water about 6 miles from Little River Inlet. Always surrounded by multitudes of marine life, the Sherman also offers a variety of artifacts for the careful hunter. US belt buckles, buttons, bottles, and fossils ave been found on this site. This site is suitable for less experience divers and checkout dives.

Hebe:The Hebe is a dutch freighter that hit the Saint Cathans bow to bow while running south during WWII blackout conditions trying to evade German U Boats. We are still finding lots of artifacts on the Hebe. In 2014 Andy raised a Portal while on the Miss Behavin with Captain Jim. The Hebe lies at 110 feet. Experience Level: E

Fossil Ledge: The Fossil Ledge is know for its large quantity of sharks teeth and whale bones. A lot of Megalodon and other various sharks teeth litter the bottom. There are also a bunch of fossil whale bones including ribs and huge vertebrae. Some areas of the fossil ledge are the prettiest ledges in the Carolinas. Experience Level: I

Ed's Lobster Wreck:  It has been suspected for a while that the "lobster wreck" was a dredge. Recently there was a confirmation of that suspicion plus a probable identification. In August 2000, Bryan Tate of Wilmington, NC found the windlass/winch from the "lobster wreck". On the winch Bryan found the name plate for the Ellicott Machine Company. The Ellicot Machine Company is still in business and after some correspondence, a company representative matched the contract number and reporte to Bryan that the winch was originally installed on the dredge, Porta Allegra.  The Porta Allegra was built around 1908 and was outfitted with a 20 inch cutter. The wreck is home to a large population of Spiny Lobsters. Recently the wreck has been invaded by lion fish. The "Lobster Wreck"  is one of the more beautiful dives off of the North Carolina.  This wreck is great for spearfishing grouper and lion fish. The boat ride is almost 3 hours each way. Depth is 95 to 130 feet. Experience Level: E

Aeolus:This vessel was sunk in 198 as part of the North Carolina's artificial reef program. It is a 409-foot tanker that lies at a depth of 110 feet. As a result of hurricanes in 196, this ship has been split into three portions, and has also partially been turned to an upright position - making it an excellent multi-level dive. On occassion, the site has become inhabited by a few sand tiger sharks. Experience Level: I

BP25: This 160 foot British Petroleum tanker was sunk as part of the South Carolina Artificial Reef Program. The dive site includes a collection of New York Subway cars. This shipwreck serves as an "ocean oasis" for a rich community of marine life. In the summer the railway cars are typically inhabited by large groupers. This is an intermediate level dive site. For less experienced divers this is a great site for Deep Diving specialty training or honing your spearfishing skills. The wreck sits on her side in 90 feet of water. This is instructor Theo's favorite site for spearing flounder. Experience Level: I

Caribsea:This ship was a WWII freighter that transported materials along the Eastern Coast. The ship had no arms at the time of its attack, leaving her defenseless. It was torpedoed on March 11, 1942 and lies in 90 fsw, and is populated by sand tiger sharks. With large groups of spadefish, baitfish, amberjacks, this site is popular for its frequent visits of stingray and cobia. Experience Level: I

Cassimir:Farb: "One of the top five dives off the North Carolina Coast." p 235. The Cassimer transported molasses from Baltimore to Cuba to be used in the rum making process. On the morning of February 26, 1942 the Cassimir was moving through a dense fog when it hit another freighter that was also moving through the fog. Both vessels were running quit and fast to avoid U-Boats. There is a gash in the starboard side of the Cassimer, causing it to sink. Visibility averages 70 feet but can get up over a 100 feet. Large schools of amberjack and spadefish can be seen swimming around the wreck. Tropical fish such as the Queen Angel can also be seen regularly. Experience Level: E

Charleston Tug: This artificial reef lies in 62 feet of water just off the coast of North Myrtle Beach. The 130 foot tug is sitting upright with the top at about 30 feet and bottoms out at 62 feet. This dive consistently produces the best inshore dive visibility.   The tug has attracted a wide assortment of wildlife. Typical species include Barracudas, Spanish Mackeral, Spade Fish, Black Sea Bass, and Gobies. Open Water Students can complete checkout dives 3 & 4 on the Charleston Tug, This is also a fantastic site for Wreck Diving Specialty and Advanced Open Water.  Experience Level: LE

City of Houston:  An amazing dive. She is an ironclad steamer that went down in a storm in 1878. Artifacts are still being found on her, as the sands shift and reveal new areas. Clear water, dense schools of fish, just fabulous. One of Captain Jim's favorite dives.  COH lies in 95 feet of water. Experience Level: E

City Of Richmond: A five deck passenger ship that  sank during a storm while being towed the Virgin Islands. Lots if grouper, snapper, and trigger fish can be found on this wreck. The shallow depth of  50 feet make it a good spearfishing choice for less experienced spear fishers. Experience Level: I