With year-round viewings of hammerheads, Daedalus is a unique locale.  Divers may  encounter oceanic whitetips, grey reef and thresher sharks. Tunas, trevallies and manta rays are seen here, too.

While sharks and pelagics are the main attraction for this area, Daedalus hosts an astounding array of visual experiences, too. Steep walls, covered with hard and soft corals, are stunningly beautiful and healthy. Many of the hard coral formations are massive creating dramatic scenes perfect for taking underwater photos or videos. Since the reef is situated in a marine park, it showcases some of the Red Sea’s healthiest corals. The vibrant colors, various textures and fascinating structures are world-class. 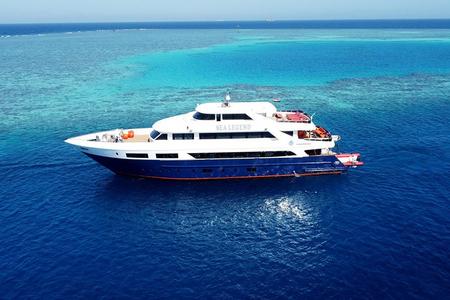 ​We are excited to offer this very unique once in a lifetime adventure to the Red Sea:

We have two options available

What is not included:

- Beer and wine are available for purchase on board. You may BYOB.
- Nitrox (available to purchase for the week

LITTLE BROTHER
Diving the walls at Little Brother is a real treat. Since the island is uninhabited, its corals are extremely pristine as evidenced by the vibrant colors. Schooling fish flourish along the full length of the wall, while sharks make frequent visits as they ascend from deep water. Grey reef sharks are most common at this island, but oceanic whitetips are visible from October to November.

​BIG BROTHER
A working lighthouse, manned by four to five Egyptian soldiers (and not open to visitors), sits atop Big Brother; from a liveaboard, it’s an impressive sight. The diving is quite different compared to Little Brother because of the shipwrecks, sharks and a sizable fish population.

The Numidia wreck,  a colossal British cargo ship that sunk in 1901, rests steeply on the wall. Recreational divers can explore the bow section of the boat. However, the stern is submerged into the depths and only accessible to tec divers. Since 1957, the wreck of Aida II has sat about 100 feet (30m) down on the wall and features many photo-worthy opportunities.

Thresher sharks are periodically spotted at Big Brother, making it one of the rare places divers can encounter the elusive animals. Grey reef sharks are also common, along with oceanic whitetips and sometimes whale sharks.

Resting only a few miles from the coast of Marsa Alam, Elphinstone Reef is likely the most famous dive site in Egypt – and it’s no wonder why. From October to December, oceanic whitetip shark sightings are extremely common. Here, the corals are as pristine and colorful as any diver could imagine.

Steep walls drop off the east and west edges of the reef, which tower up to just a few feet below the surface. On the north end, two pillars mark the end of the plateau. At the southern tip, the sarcophagus archway is a beautiful piece of scenery sitting in deep water beyond recreational limits. Fortunately, shallower water along the reef walls are plentiful and waiting to be explored.

Learn More About: Best of Egypt tour before our Liveaboard.
Click Here For More Information